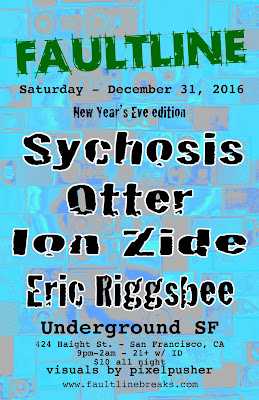 Posted by Breaks House and Bourbon at 10:27 AM No comments: 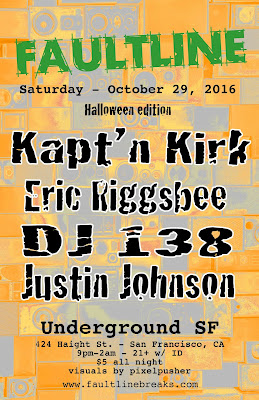 This event rated a Top 5 for this weekend! http://www.justedms.com/alexs-top-5-halloween-in-san-francisco/

After almost 3 years at Faultline we are very excited to throw our first Halloween Costume Party!

Musical support brought to you by the following:

https://soundcloud.com/spacecowboys/eric-riggsbee-ripecast
Posted by Breaks House and Bourbon at 7:21 PM No comments: 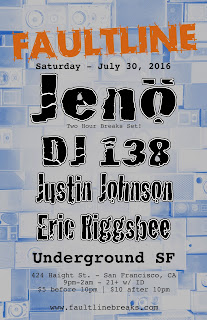 pre sale tickets available here!
Fueled by an enigmatic mystique, Jenö has remained one of San Francisco’s most beloved and sought after DJs for over two decades. Developing a passionate love for music from an early age he spent several years as a punk musician & songwriter, before discovering djing and falling into the vibrant London warehouse party scene of the mid 80s. Once Acid House fever hit the UK, Jenö never looked back, becoming known for his heady Whoosh parties, and his involvement in the early days of the notorious Tonka Sound System.
Inspired by Tonka’s cheeky f**k the rules attitude, and in search of a more psychedelic groove, Jenö, along with his British cohorts Garth, Markie & Thomas headed to San Francisco in the early 90s. This was the beginning of the now world renowned Wicked Crew, who were instrumental in firing up the SF dance music scene with their now legendary “Full Moon” parties. These wild & free outdoor gatherings were the foundation for an eclectic and soulful underground dance scene, and the driving force of the growing rave community on the West Coast.
By the mid 90s, Jenö‘s musical talents and commitment to the dance floor had helped inspire and define a new “San Francisco sound,” bringing international attention to the city’s burgeoning dance music scene. With all eyes on San Francisco, DMC sought out Jenö’s talents for a mix on their prestigious CD series “United DJs of America.” Joining the ranks of legends Frankie Knuckles, David Morales, Little Louie Vega and Doc Martin, he put together a mix of fresh local music and classic house sounds that helped put San Francisco firmly on the dance music map.
In 1995, he and the Wicked Crew took things to the next level, importing a custom made Tony Andrews designed Turbosound system from the UK. With Wicked very much in demand there was nothing else to do but hit the road, piling into a beautifully restored 1947 Grayhound bus with their own band of merry pranksters, delivering their soulful psychedelic sounds with a rock’n’roll attitude that took the U.S by storm. The touring continued through the late 90s, including some unforgettable stops at Burning Man, Reggae on the River, and even a Jane’s Addiction concert in
2001.
As the new millennium approached, Jenö took his talents to the studio and began producing his own unique take on dance music. He met all expectations with several remixes on fellow Wicked DJ Garth’s Greyhound label, including the internationally acclaimed “Stormy Weather” remix of Rocket’s “People.” This was followed by remixes on Cheeky, Turnaround Sound, NRK & others. Jenö’s production talents aren’t limited to the dance floor, having worked on some dark brooding indie music in recent years, and currently producing live acid house for his monthly “Cult of the
Acid House” party.
In 2004, Wicked disbanded after 13 years of amazing collaboration. Undeterred Jenö and Garth have kept the spirit alive with their regular Back2Back appearances up and down the West Coast; a fun loving and boundary pushing musical romp through the last 40 years of dance music. In 2011, Wicked reformed with a “Twenty Years of Disco Glory,” reunion tour encompassing 13 cities across the country. The success of the tour has put a vital missing piece back into the global dance community.

Jenö’s mythical mixing talents have translated far and wide with a diverse international cult following. He has demonstrated these talents on the decks in the premier clubs across the globe, including the legendary Twilo in NYC, The End, Fabric & Ministry of Sound in London, Unit in Tokyo and the Rex Club in Paris. Jenö continues to perform & present music with a unique and psychedelic perspective, djing regularly again across the US, as well as hosting his own musically mischievous cult radio show – Noise from the Void, broadcast bi-monthly with the changing cycle from Full Moon & New Moon.
Live Set:
https://soundcloud.com/areulisted/listed-podcast-005-jeno

Posted by Breaks House and Bourbon at 9:17 PM No comments:

Come celebrate DJ 138's B-Day and St. Patrick's Day with Faultline and the Touch Of Us crews!
Touch Of Us FB page 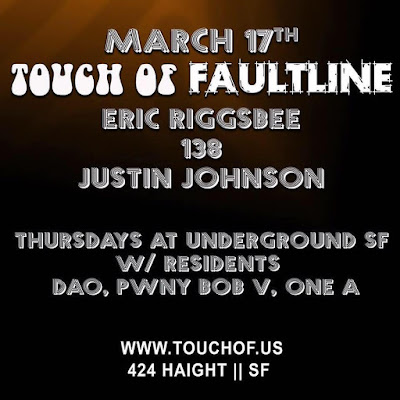 Posted by Breaks House and Bourbon at 11:40 AM No comments:

next event: Saturday April 30, 2016 with Marky Ray, Tripdubb, and Willow

A San Francisco DJ Representin' the Brass Tax Massive BO! Bringing you the best breaks, garage, techno and bass with a little bit of stank on it. It'll make you smile, it'll make you dance.

We are very excited to welcome TRIPDUBB from Seattle's own Broken Grooves, one of the world's most respected Breaks focused events for more than 14 years.

Danny started his dj career in 1999 playing at some of the biggest raves in the bay and it all started with Breaks, now many years later the love of break beats hasn't gone away.


With support from your FAULTLINE residents:

Posted by Unknown at 7:07 AM No comments: