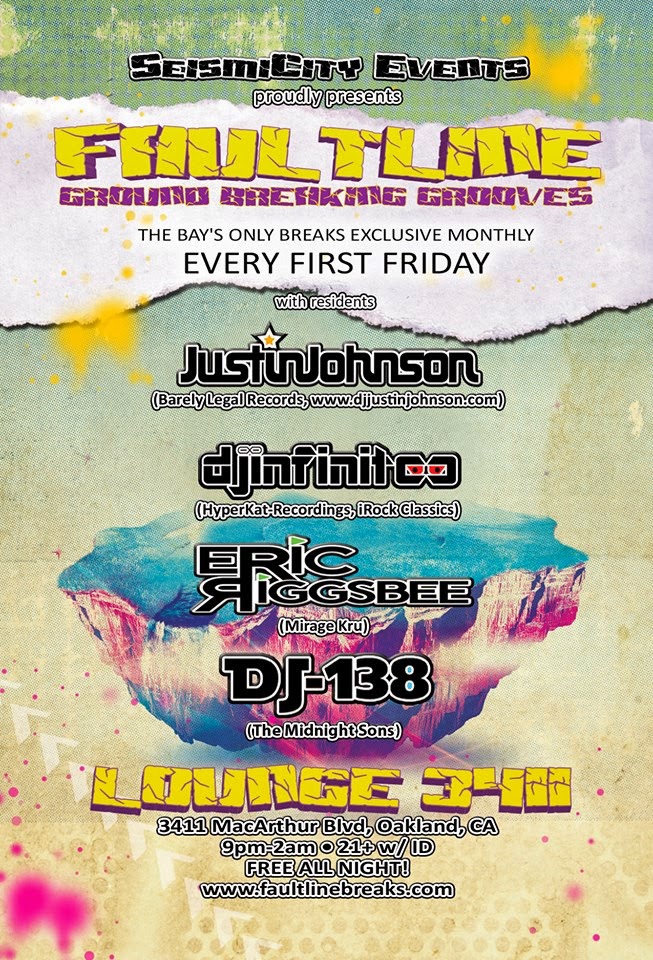 SeismiCity Events is proud to present the Bay Area's only official all Breaks monthly, "FAULTLINE," every first Friday at Lounge 3411 in Oakland!

DJ/Producer Justin Johnson has been rocking the dance floors of North America for over twenty-five years, and his eclectic mix of Funky Breaks blended with House Music and Tech House has made him a favorite at countless raves, clubs, radio shows, and special events. His influences come from all aspects of music, and he always brings the funk with him. His mix tape and CD series has been applauded for his flawless mixing skills, unique track selection, and excellent programming. Justin's production skills only add to his talent arsenal, as shown on his four record labels (Cable Recordings, Cylon Dub Receptor, Southern Vice and Barely Legal Records) and his remixes for Velcro City Records, Made Records, Mutate, Beyond Zilla, Blunted Funk, Knob, and Quartz Lock.

Celebrating 20 years rockin' the wheels of steel this year, Sean Rojas (aka djinfinitee, Sean Infinitee) made his mark in NuSkool Breakbeat after winning the Breaks FM International DJ Competition with his 3 deck mix "Live Breaks" in 2003, winning a slot playing on the same stage as Public Enemy, Orbital, Deekline, Skool Of Thought, Lawgiverz, and more at Esparrago Rock Festival in Spain. The first U.S. DJ to host a radio show on renowned UK based internet radio station Breaks FM, Sean's live 3 deck show "Thee Tilt! Sessions" and his weekly events "Hit The Breaks" and "Redline" at NYC's famed Sullivan Room featured illustrious past guests such as Kraddy, NAPT, Carbon Community, The Autobots, Fine Cut Bodies, DJ Quest, High Eight, Madame Mercury, Reid Speed, and many more well known in the breaks community. After relocating back to the Bay Area in '09, Sean played for Opulent Temple at Burning Man, and has been accredited with playing on the same card as Bunny RITM, Seb Fontaine, Elite Force and more in '10, and is most recently known for his successful bi-weekly event "WiCKED WeDNESDAYS" at Lounge 3411, and Shine SF where he held residency as producer and DJ from 2009-2011.

Eric Riggsbee’s musical path started when he was age six taking up the piano, and by age nine was looking for something more his groove. By age ten he started playing the drums, starting his own band at age twelve and playing through out the bay area up until age twenty two in bands ranging from Jazz to Metal. His DJ career started in 1998 playing Breaks and throwing his own parties in Santa Cruz, Oakland and San Francisco. His natural tendencies on the drums made crafting his signature tones and melodies seem effortless. Eric Riggsbee’s zipper smooth mixing style, exceptional music selection and tight programing have gained him the reputation for creating fun ass shaking music, that always get people on the dance floor.

DJ-138 ( Marco Mirenzi)
(Midnight Sons, SF/OAK)
Originally hailing from the Washington DC area, DJ 138 has been playing dance music since late 1999. Starting off learning the ropes with the broad spectrum that is the House genre, this entity swiftly fell in love with a thing called a "breakbeat", and while DJ 138 never lost it's love for the four on the floor style, the breakbeat became it's favorite muse. Drum&Bass, Breaks, Downtempo - if it's got a broken beat, DJ 138 will exploit it. 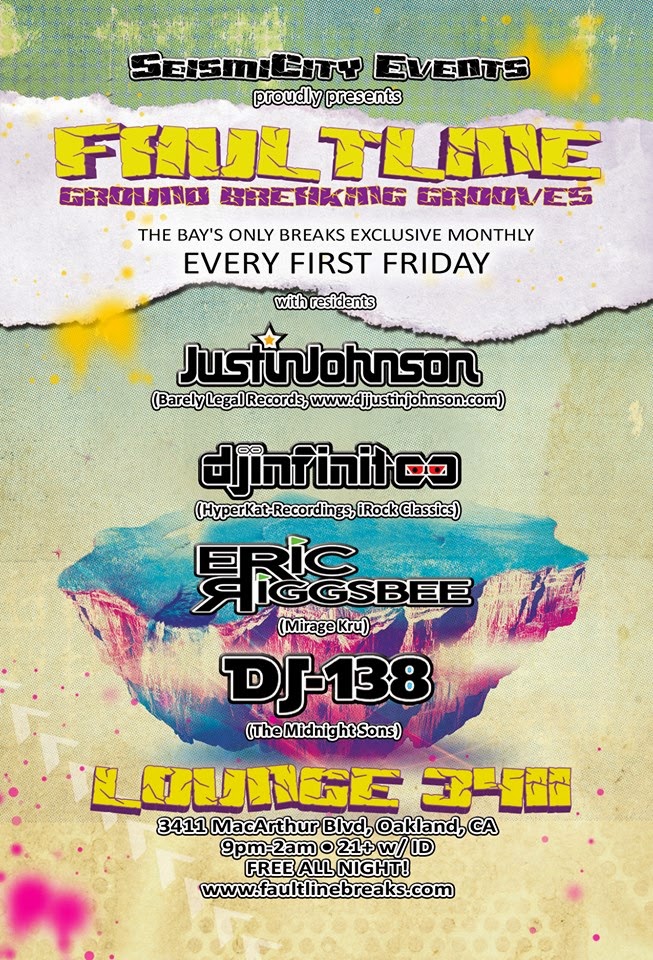 Posted by Breaks House and Bourbon at 9:05 AM No comments: